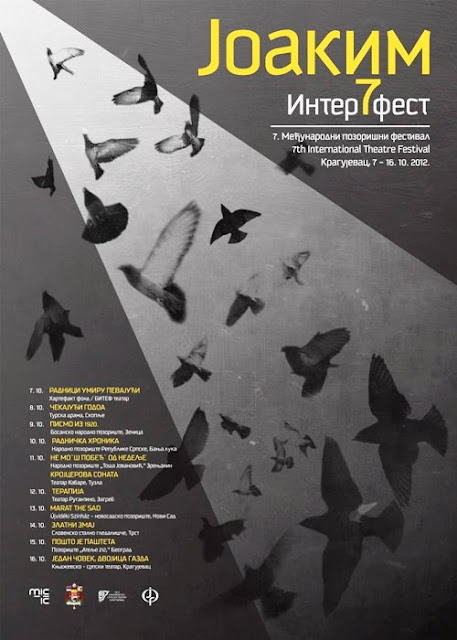 From October 7th till October 16th 2012 in Kragujevac
at Knjaževsko-srpski teatar, it will be held the JoakimInterFest!


The Sewenth International Theatre Festival will gather groups from Macedonia, Bosnia and Herzegovina, Croatia, Italy, Republic of Srpska and Serbia. You will have an opportunity to see nine plays, eight of them in competition for the awards and the play of the Richard Bean One man, two guvnors in the honor of the awarded.


The opening ceremony will be on Tuesday, October 7th, 2012 at 8:00 p.m. Following the opening, the Hartefakt fond / Bitef teatar Belgrade will perform the play Radnici umiru pevajuci, written by Olga Dimitrijevic; directed by Andjelka Nikolic.


Moderator of the creators meeting is Aleksandar Novakovic, playwright.
Director of the printed publications is Zoran Misic, journalist from Kragujevac.