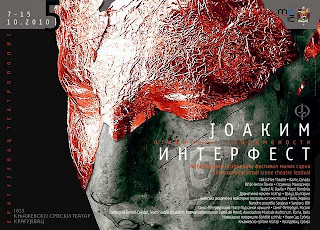 Selection of this years performances, coming from different cultural, social and political environments, give a new light on relation between drama inheritance and tradition, each in its own way. They are asking essential questions and research the relation between individual and history and the world in an acceptable and contemporary lucid way. Having no intention of embellishing past, they evaluate and critically consider on giving an authentic interpretation of a modern artist in a best possible way.
Dragan Jakovljevic, Selector
Jury of the 5th JoakimInterFest consisted of Boro Draskovic (Chairman), Dragana Boskovic and Slavko Milanovic had seen all plays and unanimously decided:
That the Joakim's award for the best female character role goes to Mediha Musliovic for the role of Miss Julie in August Strindberg's drama of the same name, directed by Gradimir Gojer, performed by National Theatre from Sarajevo. The award is given for interpretation of intimate theatre, complex relations between woman and man.
Joakim's award for the best male character role jury gave to Anastas Popdimitrov for the role of Roman Hludov in Dreaming Of Escape based on Mikhail Bulgakov's play, directed by Nikolai Poljakov, performed by Dramatic-puppet Theatre from Vratsa, Bulgaria. The award is given for affecting interpretation of human destiny in revolution.
And to Toni Mihajlovski for the role of Jeronimo in play Red Magic, based on Michel de Ghelderode's work, directed by Vladimir Milicin (Anton Panov, Strumica, Macedonia). The award is given for versatile interpretation of complicated acting score.
Joakim's award for music goes to Andres Mariano Ortega for the music in Midsummer Night's Dream, directed by Zoltan Puskas, performed by Ujvideki Szinhaz Theatre from Novi Sad. The music as if it is not written in the musical staff but in the bodies of the actors which are performing.
Joakim's award for visual identity goes to the play All about Love, directed by Aleksey Kuzhelney, performed by Ukraine theatre Suzirya.
Joakim's special award Jury gave to the play I Try to Fly by Gianfranco Berardi, Compagnia Berardi-Casolari, Teatro Stabile di Calabria, Festival Internazionale Castel dei Mondi, Associazione Musicale Auditorium (Rome, Italy) for aesthetic emotion, pure and joyful that wascaused in cheerful audience.
Joakim's award for the best director goes to Ivana Vujic for directining researching of the road towards poetics of new objecitvity through all ellements of scenic expression in play Pioneers in Ingolstadt, based on Marieluise Flaisser, performed by Knjazevsko-srpski Theatre from Kragujevac.
Joakim's award for the best play is given to the Midsummer Night's Dream, directed by Zoltan Puskas, performed by Ujvideki Szinhaz from Novi Sad. In this play the magic of Midsummer Night's Dream was realized without words through myriad forms of movement: hearty rhythm and energy.
Audience award with an average rating of unbelievable 9,94, got the play I Try to Fly performed by Berardi-Casolari Italian Troup from Calabria, second best play according to audience is Shakespeare's Midsummer Night's Dream performed by Ujvideki szinhaz from Novi Sad, with average rating 9,70, and the third place with average rating 9,40 is the play The Tale of Ivan vs. Ivan performed by Talk Is Free theatre from Barrie, Canada, directed by Sasha Lukac.